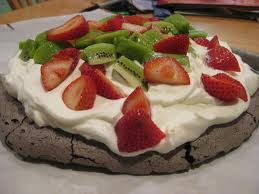 When you need a dessert with knockout crowd appeal, a pavlova—basically a big meringue—delivers. Though meringues can be finicky, such tricks as the addition of vinegar and a slow bake guarantee a good result. This meringue is crisp outside, with a chewy, brownie-like interior.

Make the meringue:
With an electric hand mixer or stand mixer (use the whisk attachment), whip the egg whites, cream of tartar, and salt in a large dry bowl on medium speed until foamy, about 30 seconds. Gradually add 1 cup of the sugar and then the cornstarch and vinegar; whip on medium high until the whites hold stiff peaks and look glossy, another 3 to 5 minutes. Add the sifted cocoa powder and mix on low speed until mostly combined, 20 to 30 seconds, scraping the bowl as needed. Finish mixing the cocoa into the meringue by hand with a rubber spatula until well combined and no streaks of white remain.

Shape and bake:
Pile the meringue inside the circle on the parchment. Using the spatula, spread the meringue to even it out slightly— it doesn’t need to align perfectly with the circle, and it shouldn’t be perfectly smooth or overworked. The natural swirls and ridges give the finished meringue character.

Bake for 10 minutes and then reduce the heat to 300°F and bake until the meringue has puffed and cracked around its edges, another 45 to 50 minutes. Turn off the oven, prop the oven door open, and leave the meringue in the oven to cool to room temperature, at least 30 minutes. The delicate meringue won’t collapse as much if it cools gradually.

Assemble and serve:
Just before serving, put the meringue on a serving platter. In a chilled medium stainless-steel bowl, beat the cream with the remaining 2 Tbs. sugar until it holds soft peaks. Whip in the tangerine zest, making sure it’s evenly distributed. Pile the whipped cream on the meringue, spreading it almost out to the edge, and then top with fruit. To serve slice into wedges with a serrated knife.