I am just so excited!! The Jimi Hendrix USPS Stamp is coming! 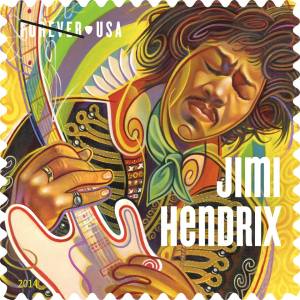 Jimi Hendrix died 43 years ago at the age of 27, but his legacy will live on “forever” on a new U.S. postage stamp.

“I am deeply touched and so are other members of the Hendrix family by the issuance of this stamp, and I wish to thank the United States Postal Service for bestowing one of our nation’s highest honors on my brother Jimi,” Janie Hendrix, the sister of the late guitarist, said in a press statement. “While my brother has been cited many times as being among the most influential musicians of all time, the recognition implicit in his being portrayed on a U.S. postage stamp ranks as an unparalleled honor.”

The release of the stamp coincides with an upcoming biopic on the Rock and Roll Hall of Famer, All Is By My Side, starring Outkast’s Andre 3000, which was scheduled to premiere at SXSW. Last year saw the release of People, Hell & Angels, a posthumous collection of previously unreleased recordings by Hendrix.

Next up in the USPS’ Music Icons series will be a stamp commemorating rock singer Janis Joplin.